Although the weather might still leave some room for improvement: spring will come – and it will urge you to go outside. Some might enjoy a long walk, a little hike or simply sitting outside on the veranda. Others might aim for some bigger physical challenges and ask themselves: cycling or running – which is the better choice?

We are going to compare these “classics of spring activities” and are having a look which one is better for certain goals, which is suitable for whom and why combining the two is, in fact, the best choice. Let’s get into it!

The most important question for those who would like to get in shape this spring and summer is how many calories they can burn with a certain activity. There is no definite answer because the amount of calories depends on various factors, such as training and intensity, terrain, and personal specs like your gender, age, and body weight.

However, there is a general rule: because you are using many more muscles while running, you will burn more calories within the same time compared to cycling. At an average speed of ten kilometre per hour (which equals to a pace of six minutes per kilometre), a male runner of 80 kilos will burn about 850 kilocalories an hour. The faster he runs, the more calories he burns.

Just for comparison: you have to go with an average of 20 km/h on the bike to burn at least 600 kilocalories. In addition, you can get a bit more out of your body, if you intersperse the training with some climbs and sprints. Even more power has to be used when you do not ride on a high-end racing bicycle but on a rickety old one (the latter definitely requires more effort and calories to achieve the same speed). 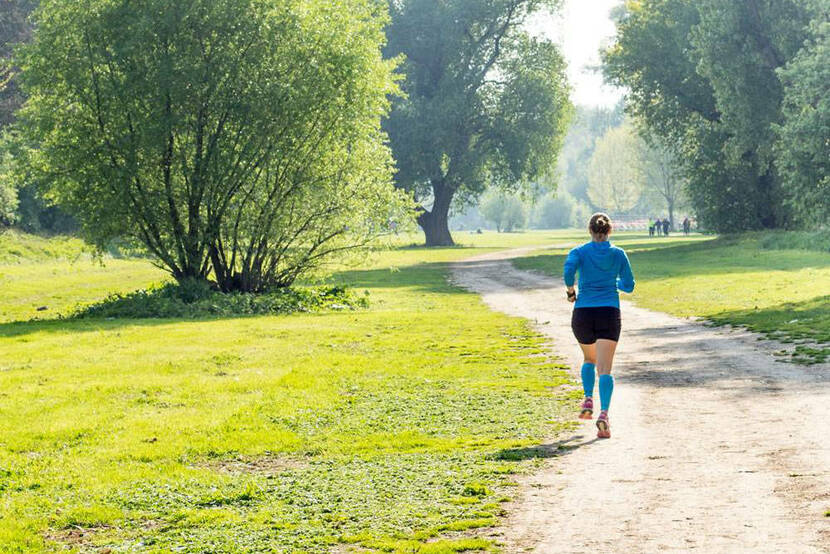 CYCLING VS JOGGING: WHICH IS MORE JOINT-FRIENDLY?

Despite the fact that you can burn more calories with running, doctors and physiotherapists usually advise sports beginners to go cycling rather than jogging. There is a simple reason for that: the strain on the joints is much less on a bicycle.

More than half of the body’s weight is carried by the saddle, which makes cycling one of the most joint-friendly sports of all. In addition, you can still build muscles and reduce stress on a bike. That makes cycling an ideal alternative and supplement to joint stressing sports like running and marathon training.

CYCLING OR RUNNING? BOTH!

Not just passionate (long-distance) runners should include cycling into their training plans. After long runs your body needs to regenerate muscles and joints. If you go for a bike ride, it can do just that while still maintaining a good physical condition. By some light physical activity, you can increase your metabolism which aids in recovery. For an additional benefit: clipless pedal systems allow for training of both, the leg extensor and the hamstring muscle. This practices the famous “circular pedal stroke” – which, in turn, can help you optimise your running technique and efficiency.

In short: cycling and running go together really well because cycling provides a good alternative for a varied training plan, especially if the plan includes 40 or more running kilometres every week during marathon training.